Public or private, pre-K to College, Vanguard Cleaning Systems of the Ozarks' subscription school cleaning services can help knock out infections in some of the germiest spots kids touch every day. 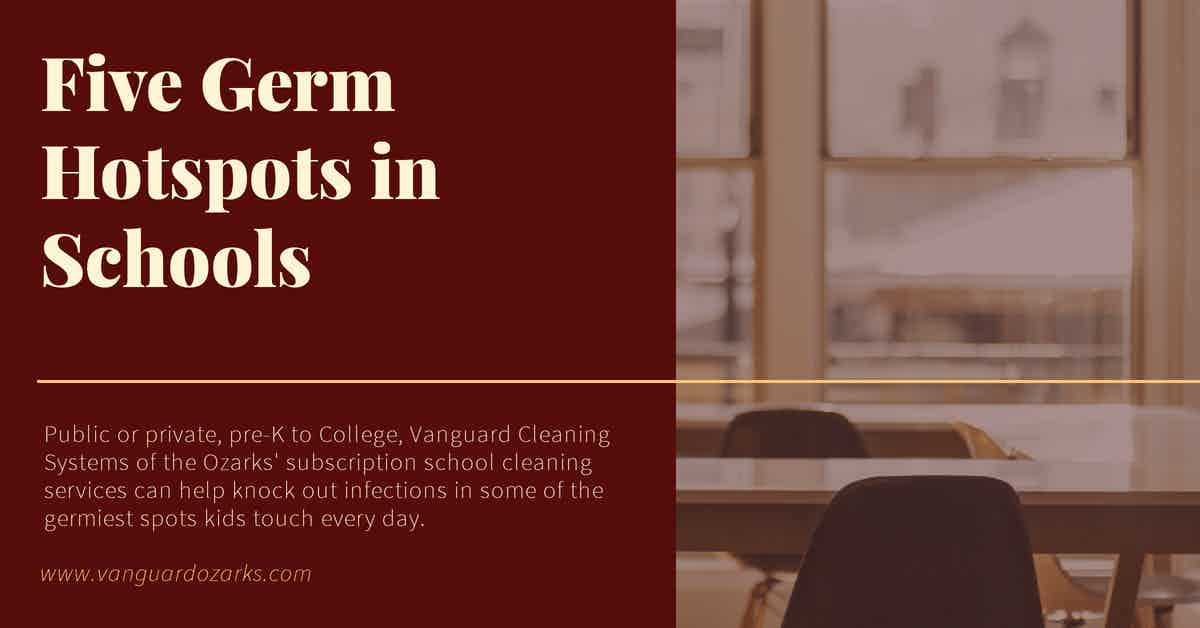 School facilities are petri dishes for germs of every kind, including:

The two primary causes behind the elevated number of easily transmissible germs and bacteria on school surfaces are:

Common Germ Hotspots in and Around Classrooms

The five most commonly cited germ hotspots in or around school facilities and classrooms include:

In addition to the challenge of an abnormally high number of germ hotspots throughout education facilities, poor hand hygiene habits, a problem adults still face in the workplace, present additional barriers to student health and safety.

While reports show that, according to parents, students exhibit high levels of compliance when washing their hands after using the restroom, their apparent failure to clean them thoroughly at other key points during the day contributes to the number of germs contaminating school surfaces.

Troublingly, two of the most commonly cited reasons by students regarding their overall poor hand hygiene habits were:

According to a survey conducted by American Cleaning Institute;

Nearly half said that the most common reason they failed to do so was because their school schedules did not allow them time.

For many students, the state of the schools’ toilets is a turn-off.

Forty-seven percent occasionally avoid the restrooms because they are dirty.

And, finally, some kids simply need to be told but aren’t: 16% said that "No one reminds me to."

Less than two-thirds of children say they wash their hands before lunch; 26% do not wash their hands after handling garbage. Only about half wash up after coughing, sneezing, or blowing their nose.

Many districts are hindered by budgets that prevent effective cleaning measures and schedules, which increases the chances for germ transmission, student illness, absences, and poor classroom performance.

This process ensures prices are affordable, costs are predictable, services are scalable, classrooms are safe, and students are healthy.