Do Electronics Spread More Germs Than Other Surfaces?

Without a doubt, the surfaces of the numerous electronic devices we handle every day are covered in germs and bacteria, but do they spread more illness than other high-touch surfaces? 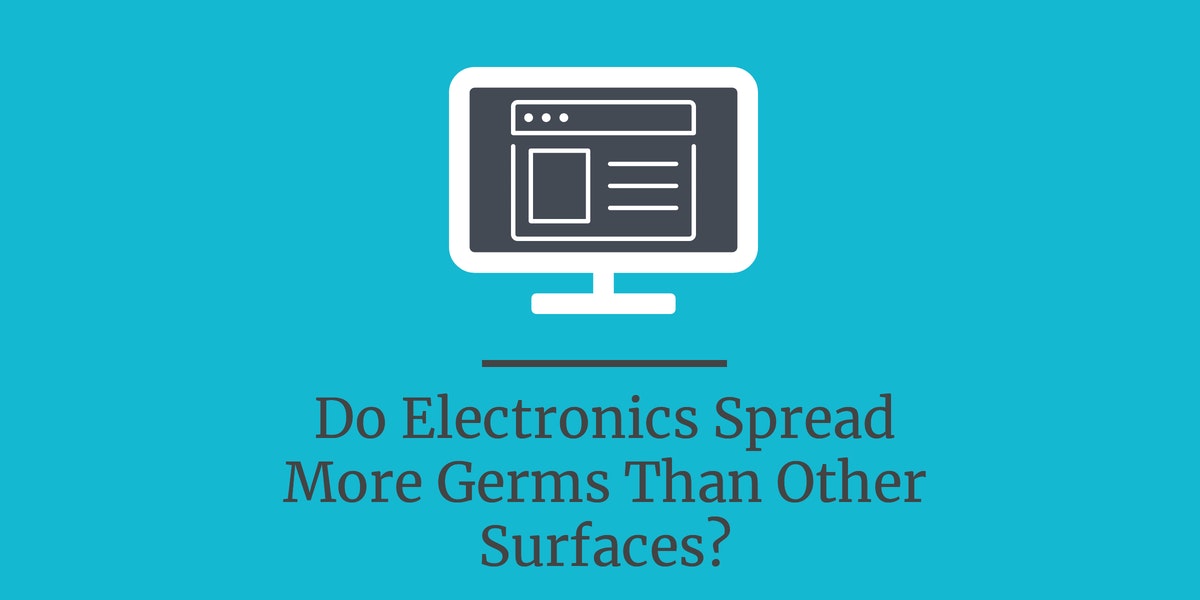 Do Electronics Spread More Germs Than Other High-Touch Surfaces?

Lately, a debate has arisen in the health and custodial industries regarding the safe use and hygiene of electronic and personal handheld devices in comparison to other fomites and their ability to transmit disease--basically, which is worse?

The answer, of course, is both, and neither, depending on the environment and the hygiene of the users and occupants.

While initially, that may sound confusing and contradictory, a review of a few scientifically documented facts will help clear up the matter.

In numerous studies--one as recently as 2018--computer keyboards in practically every environment, from classrooms to labs and offices, have tested at obscenely high levels for illness-causing germs and bacteria, making them consistently the most contaminated surface you are likely to come into contact with during any given day, including a toilet seat.

A 2018 study published in the International Journal of Environmental Research and Public Health found that 96 percent of the 25 keyboards sampled were contaminated with microorganisms like E. coli.

The situation can be even worse if you’re not the only one using a keyboard, like in the case of a shared computer in a conference room.

In 2009, the American Journal of Infection Control published a study that examined 35 keyboards in three different university computer labs, finding that multiuser workstations had about four and a half times as many bacterial colonies per square centimeter.

These 7 Things at Your Office Are Especially Germy

Now, depending on which article you read and what source it cites, keyboards can range from five to twenty thousand times filthier than a toilet seat--the laymen standard of measurement for such reports.

Conversely, smartphones and tablets tend to rate much lower on the toilet seat comparison scale.

According to a 2013 NY Daily News article;

British watchdog Which? claims that your smartphones, keyboards, and tablets are more contaminated with germs than a public toilet seat.

Lunch at your desk anyone?

The company took swabs from 90 devices, finding "hazardous" levels of bacteria that can make you sick, including E. coli.

One iPad had 600 units of Staphylococcus aureus, while a smartphone had 140.

The dirtiest keyboard had 480, compared to less than 20 units per swab of an office toilet.

While this may appear to be convincing evidence that electronic devices are, by far, the most likely surfaces to pass germs to ourselves and others, several non-electronic surfaces outrank everything but keyboards in microbe tests, including:

So, what's the correlation?

How are Germs Most Commonly Transmitted?

First, let's address why these surfaces are habitually covered in more pathogens than toilet seats--it's because toilets are cleaned regularly.

If toilets were cleaned as often as keyboards or smartphones, you'd never hear a word about them, and we would have a significant health epidemic on our hands.

The second correlation between the spread of germs and the various surfaces is hand hygiene.

Those germs are transferred to various hard surfaces--the more commonly touched surfaces are referred to as germ hot spots or high-contact surfaces.

The germs are then spread to every other person who touches that surface over the course of the next few hours to sometimes days or weeks, leading to infectious illness, and the cycle repeats.

So, to answer the question; what is responsible for the transmission of most illness-causing germs and bacteria?

The solution to this challenge is quite simple.

Addressing the Spread of Common Germs and Bacteria

Preventing the spread of germs and bacteria in schools and office buildings requires three simple steps.

How much and how often will vary depending on your particular facility.

Surfaces are not responsible for the spread of germs and bacteria to humans--quite the opposite.

Human behavior is directly responsible for the contamination of every surface we come into contact with.

Germ transmission occurs as a result of sharing those surfaces or objects with another person.

Curbing and correcting people's habits and behavior will take a tremendous amount of training and education.

A high-performance cleaning and infection control process will address the challenge of surface contamination and facility hygiene now.