Biking to work has become an increasingly popular form of commute for many in large metropolitan areas, but it does come with some consequences, specifically regarding workplace health and hygiene. 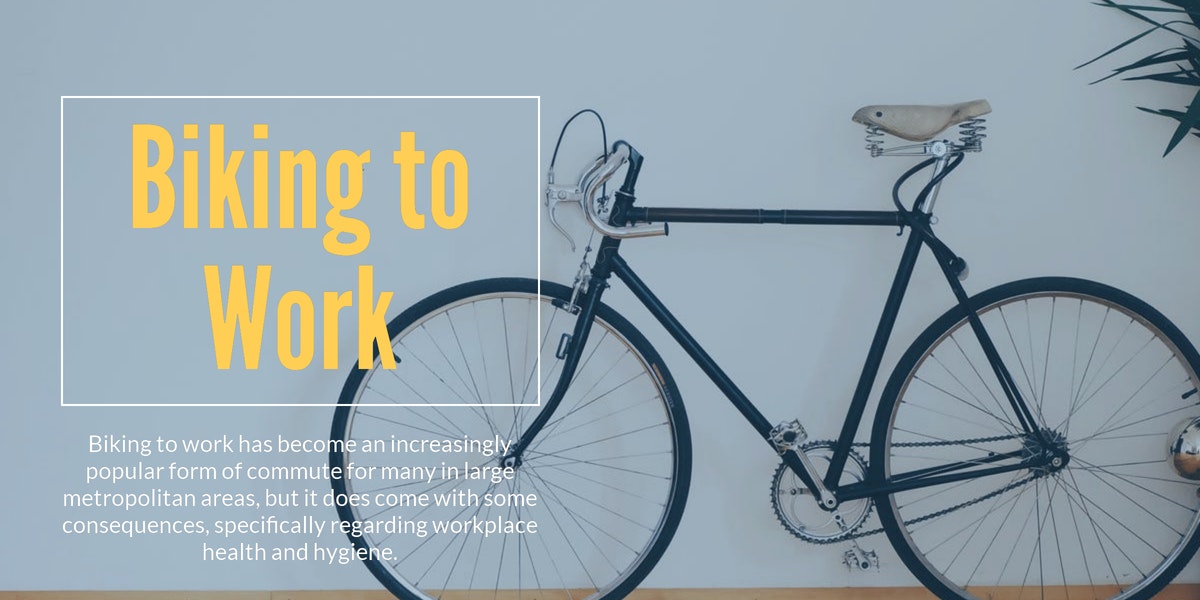 Bicycling as a form of commute to and from the workplace has several advantages for both workers and businesses--chief among them, healthier workers are more engaged and productive.

However, a bicycle commute does not come without its challenges, specifically office hygiene.

Compounding the issue--regardless of how a business chooses to address the health and workplace hygiene challenges of bicycle commuters, additional cleaning challenges will arise, including:

The first challenge any office manager or business owner will need to address in regards to the allowance of bicycle commuting is storage.

Outdoor storage has some drawbacks, specifically in regards to the safety of the equipment, but will reduce the dirt, germs, and chemicals the tires pick up on the road from being transferred onto your floors.

Conversely, indoor storage mandates regular floor and entry mat maintenance to prevent these germs and other particles from negatively impacting indoor air quality and fouling up your organization's professional appearance.

For those that choose to take advantage of bicycle sharing programs, you will want to make hand sanitizer readily available at the entrance and implement regular wipe downs of door handles and other high-touch surfaces to prevent the spread of the numerous germs found on the handlebars.

The title for the grossest public object in New York City goes to Citi Bikes.

Turns out, the handlebars on these communal bikes are less hygienic than the hold bars on subway trains—45 times germier to be exact.

The second challenge is hygiene, specifically the smell from sweaty bodies and how that impacts fellow office workers, as well as the germs sweat can transmit.

In regards to body odor, it's safe to assume that it will negatively impact the mood, behavior, and work performance of a good portion of your staff who must work in close proximity to the worker(s) in question.

According to Scientific American;

Downstream from how odors influence our moods is the way that moods influence how we think (cognition) and how we act (behavior).

In terms of cognition, mood has been shown to influence creativity with the typical finding that people in a positive mood exhibit higher levels of creativity than individuals in a bad mood.

Taking this one step further is the way in which mood influences on thinking are translated into observable behavior.

A growing body of literature shows that positive mood is linked to an increase in productivity, performance and the tendency to help others, while negative mood reduces prosocial behavior.

Further, as previously noted, sweat can act as a transmission device for several types of dangerous germs and bacteria, including:

The most obvious solution to these challenges is the provision of shower and locker facilities for bicycle commuters to wash up.

Showers and locker rooms present their own health and hygiene challenges, including playing host to the same germs transmitted by sweat.

Just like restrooms, they will need to be cleaned and disinfected every day.

Additional policies should be enforced requiring locker room users to remove their gym bags every day, provide their own shower towels and toiletries, and clean up after themselves as much as possible.

In regards to cleanliness and sanitation, the most critical areas to focus on will be:

Employing an electrostatic disinfection appliance will significantly reduce the amount of time required to sanitize these facilities while ensuring the high standard of cleanliness.

Bicycle commuting has increased in popularity, especially in large metropolitan areas where cars and public transportation have become increasingly problematic and expensive.

While bicycling offers the benefits of improved health for the commuter-worker, which tends to translate into better performance at the office, it is not without its drawbacks, specifically workplace hygiene.

Implementing a high-performance cleaning and disinfection program will ensure that everyone gets what they want while remaining safe and healthy.